Will your brake bleeder bleed my vehicle?

It usually starts like this ” I have a 2004 make and model can your brake bleeder work on my vehicle or do I have to buy any extra adapters? Yes it will!

The answer to all questions about whether the phoenix bleeder can bleed your specific vehicle is YES! The phoenix bleeder is not vehicle specific meaning it’s not your vehicle but your brake or clutch system. Whether you have a car, truck, trailer, motorcycle or any hydraulic system.

How do I get the bleeder?

Go to brakebleeder.com and order your bleeder today!

Put on Your Brakes and Read!

Hi, this is Elizabeth again with Part III of my own personal education on what is under the hood of my car. In doing my research on Brake Bleeding.

Systems, I found out the the U.S. Military is the largest client for Phoenix Systems. Wow, that was good enough for me!!

The Phoenix MaxPro Bleeder is included in every US. Military SATS Kit (that’s a Standard automotive tool set) and are used in full service military facilities as well as the deserts in Iraq. Because of the performance standards applied by Phoenix Systems, brake companies like Stop Tech, Baer Brake and Performance Friction recommend the use of Phoenix Bleeders to get maximum peformance from their performance brakes.

One of their customers, Ron Gibbar said, “I had to learn how to drive my
Chevelle all over again after using a Phoenix Bleeder because of the difference in pedal response and firmness.”

I was particularly impressed that there are 5 patents that cover this type of bleeding. One of the tech’s told me is was “like trying to swim to the bottom of a pool with a beach ball” to use traditional bleeding methods which attempt to push air down.

Getting Rid of Trapped Air In Your Brake Lines!

This is Elizabeth Ann again-regular driver like you, trying to make my way through what my car really needs regarding my brakes. As I said at the end of my last post, I found out some pretty interesting info and I wanted to share with you.

I found out that I may have trapped air in my brake system and THAT is not good! I had heard the term “brake bleeding” before (really, I had-but I

had no idea what it meant). I have a friend who worked for Phoenix Systems and he told me that air rises in fluid, kinda like bubbles in your soda. Phoenix Systems has a tool that is used to perform a technique called Reverse Brake Bleeding. Once you learn what a caliper bleed screw is and where it is located, just attach the special tool in the kit and …PUSH the air and brake fluid UP into the master cylinder. Brake Fluid fills the reservoir and air escapes. Simple! 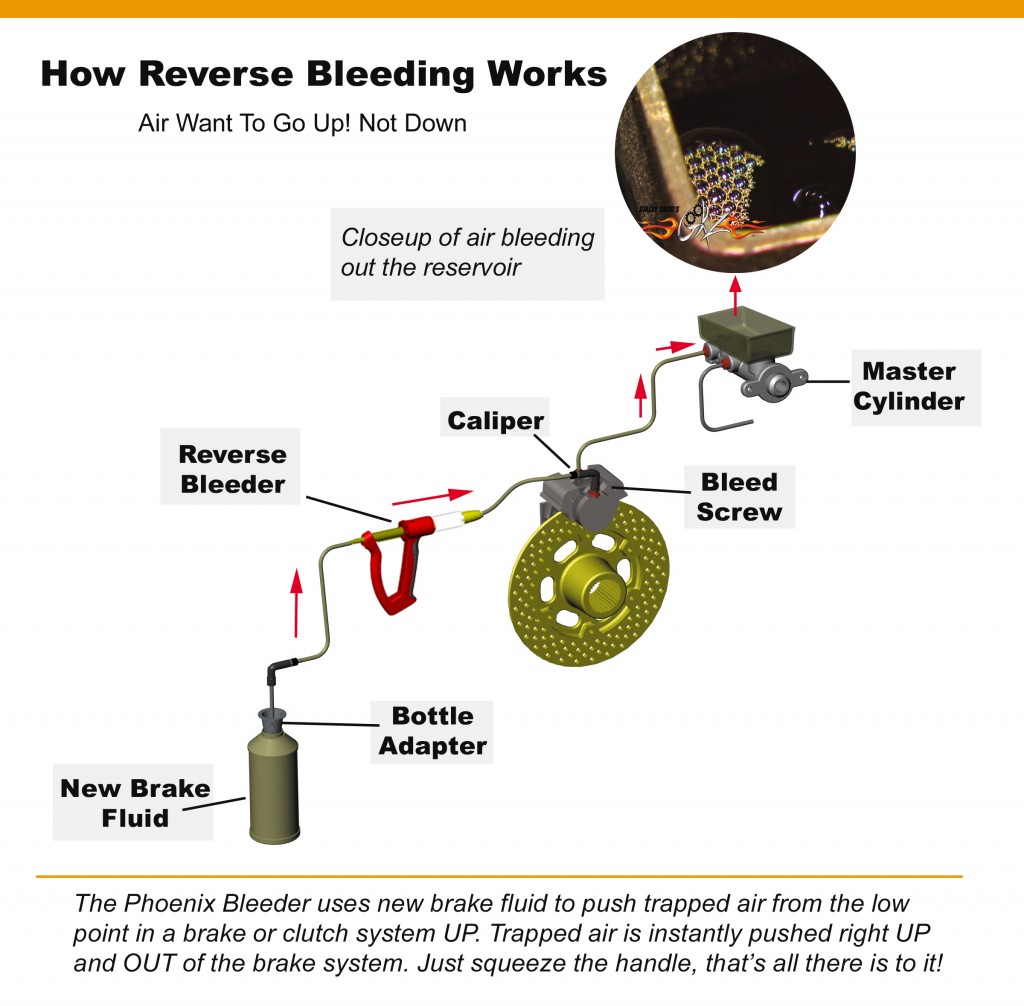 What is so great is that Phoenix can use another technique called Pulse Generation to reduce surface tension on trapped air. It’s like tapping on a caliper or brake part from the inside. There is also a cross bleeding method wherein you can bleed from one caliper directly to the other! I don’t know about you, but I want to know about this stuff-my brakes are everything to me! I NEED them to be in perfect working order!!

When I asked my friend which method I should use, he said that in most cases not one bleeding method by itself removes ALL the air, so a combination works best. He told me that the Phoenix Bleeders were designed to also perform pressure, vacuum, bench and cross bleeding, in addition to reverse bleeding. Wow, with one tool, I could potentially perform every known method of bleeding to remove the most trapped air I could possibly get!

And I learned something really awesome-Phoenix Brake Bleeders are self-contained and can be used no matter where I am.

I have been asking some more questions, regarding clutches and other stuff I think I need to know. Stay tuned for Blog #3 and visit www.brakebleeder.com

Brakes-What Do You Know About Bleeding Your Brakes?

An Important Lesson For You

I’m a regular driver, probably a lot like you. I know how to change my oil, check my tires and I am aware of taking the car into the shop for periodic maintenance. I also recognize the importance of making sure my brakes are working correctly. But beyond that, I am pretty green on what to look for as signs of potential trouble.

I have heard of the phrase of bleeding brakes, but honestly had no clue on what that truly meant. Because of what I have learned and the importance of the information, I wanted to set up a 3 part blog to share with you what I learned in hopes that you, too, will understand the importance of brake bleeding and how to get full performance from your brakes.

A big problem is trapped air in brake systems. Air is compressible in a hydraulic brake system. It takes time for air to compress, while the real hydraulic braking work has to wait. And, you and I both know that time is critical in braking! A LOT can happen in 20 feet or a few hundred milliseconds. You will find out how to bleed brakes by yourself (no more pestering your spouse, your neighbors or your family) in less time than you ever thought possible.

A typical driver, like you and me, may have trapped air in our brake system and not know it. I learned you adapt for it in the way you brake. So what can you do? What good is it to put on high tech brake systems like Stop-Tech, Performance Friction, Baer, Wilwood, Brembo if you have trapped air? All this information started me thinking about my brakes, possible trapped air and stopping power. I did some research and found some important information I want to share with you in the next blog. In the meantime, if you cannot wait for the next blog, check out Brakebleeder.com for more info.

Look for Part II very soon and sign up for our Newsletter!!